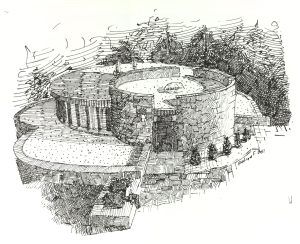 chitecture came slowly to Williams College. Colonial Revival was the rule until the building of Driscoll Hall in 1963. But long before this, the college was experimenting with modern ideas, and it was often students who took the initiative. A student campaign persuaded the college to build its first modern infirmary, complete with a surgical operating room. And it was a student-run fraternity that tried to give the campus its first completely modern building (but which gave it one of its ugliest). Through it all the campus’s development was guided by America’s most distinguished firm of landscape architects, the Olmsted Brothers.

This exhibition, organized by a Winter Study class, looks at selected projects from the College Archives. Together they show Williams College’s slow, fitful, and sometimes amusing move toward modernism. On view in the Schow Gallery, Sawyer Library 455, M-F 10:00-4:30, through February.