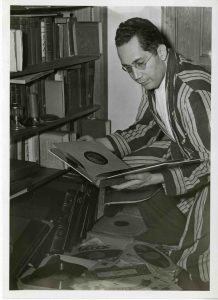 Throughout his lifetime, D.C. Native, Sterling Allen Brown wore many hats. Novelist, poet, essayist, literary critic, and educator extraordinaire, SAB was also considered a top authority on folk music and blues. His participation in events such as the 1952 Jazz Roundtable panel session, “Jazz and the American Popular Culture,” and the 1958 Newport Jazz Festival panel discussion “Jazz and American Life,” underscores how revered Prof. Brown was by musicians, academics, and his contemporaries.

Affectionately referred to as the Dean of African American Literature, his works Southern Road, The Negro in American Fiction, Negro Poetry and Drama: and the Negro in American Fiction, and perhaps his most renowned publication, The Negro Caravan, have cemented him in the American literary canon. Like his contemporary Langston Hughes and mentee Amiri Baraka, SAB was also influential in establishing what is known as blues poetry. Stephen E. Henderson’s “The Heavy Blues of Sterling Brown: A Study of Craft and Tradition,” shares that it is worth not that the hallmark of Prof. Brown’s poetry is its exploration of the bitter dimension of the blues, as well as the ballad, folk epic, lie, and the song sermon.

As a professor at Howard, SAB would often invite students, friends, and family into his home for fellowship, with his curated record collection providing the musical backdrop. However, it was while a student at Williams College that he began building his vast and culturally significant 20th-century record collection replete with folk music, jazz, blues, big band, classical, spoken word, gospel, and spirituals. The blues, specifically “Crazy Blues” by Mamie Smith, one of his first record purchases and the first blues ever recorded in the US, helped him combat the isolation and loneliness he experienced at Williams. Often, after midnight, SAB and fellow Black classmates would meet at his Spring street dorm room and gather around the phonograph to listen to the blues.

What began as a hobby, continued to grow over nearly eight decades. A highlight of the record collection is that it includes records released on Black Swan Records, the first Black-owned record label founded by Harry Pace. One of the most beautiful offerings of Black expressive culture, this music playlist clocks in at 3,316 songs and 194 hours. The playlist is a catalog of the records SAB collected over his lifetime and includes works from Mahalia Jackson, Blind Lemon Jefferson, Ella Fitzgerald, Illinois Jacquet, Fisk University Jubilee Singers, Count Basie, Sister Rosetta Thorpe, Jelly Roll Morton, Chick Webb, Ma Rainey, Bessie Smith and many more. The collection is housed in the Williams College Special Collections in Williamstown, Massachusetts.

The Spotify playlist was compiled by Sterling A. Brown Archivist and Curator, Jessica C. Neal, Joey Hua-Phan , and Akhir Stewart.