The Sterling A. Brown (SAB) Papers detail the life, work, and teachings of Sterling Allen Brown. SAB was a known jazz and blues aficionado, renowned poet, and considered the “dean of Afro-American literary studies.” The collections also include letters, photographs, and music that evidence half a century of professional engagement activities, collaborations, and professional and personal relationships. Among SABs many long-lasting relationships was his friendship with fellow Washingtonian and jazz legend, Edward Kennedy “Duke” Ellington.

SAB and Ellington were childhood friends, who had very similar middle-class upbringings in Washington D.C. Both were reared in homes and families that fostered their curiosities in prose and music, respectively. While SAB attended Dunbar High School and was under the tutelage of Jessie Fauset, Haley Douglas, and Anna Julia Cooper, Ellington attended Armstrong Manual Training School. While in high school, Ellington began to take private lessons in harmony from Armstrong’s music teacher, Henry Grant, whom he credits with establishing his musical foundation. Coming of age in D.C., SAB and Duke witnessed and participated in the cultural renaissance of U Street, aka “Black Broadway,” that predated 1920s Harlem.

After years of playing Ragtime in clubs, rent parties, and for private societies, Duke relocated to Harlem, arriving on the emerging jazz scene. Jazz, with its origins in ragtime and blues, had begun in New Orleans and traveled north to Chicago, D.C., and Harlem. As the 20s roared on, Ellington’s major entree to success came when he assumed the role of band director of the Black Sox Orchestra, which rebranded as “The Washingtonians.”

By the mid-20s, The Washingtonians landed a permanent spot at the famous Cotton Club, which catalyzed Ellington and his band’s fame and popularity in 1927, drawing large crowds and even regular NBC broadcasts. Duke Ellington’s musical presence was a force to be reckoned with, as fans were captivated by his elegance, stage presence, lifestyle, and self-confidence, which was shaped by the Washington community that raised him. Ellington also increased exposure of Black musicians to wealthy white clients of the Cotton Club and subsequently to a more broad, diverse, and international musical audience. 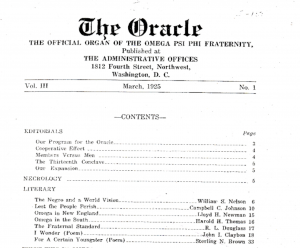 Similarly, SAB was also contributing to the Black creative expression that blossomed during Harlem Renaissance. In 1925, SAB published his first poem, “For A Certain Youngster,”  in the March issue of The Oracle. During the 20s, SAB was influenced by other Black poet contemporaries like Langston Hughes, Jean Toomer, and Countee Cullen, Helene Johnson. During this time, SAB would contribute regularly as an editor and poet to publications such as The Crisis and Opportunity. Notably, his poem “When de Saints Go Ma’ching Home,” won Opportunity’s 1927 poetry prize.

In the 1930s SAB and Duke continued to experience parallel success. SABs poems depicted stripped-down portraits of Black experiences and legitimized the genre of African American folklore as an artistic expression. His collection of poems, Southern Road, published in 1932, pioneered a new era of African American literature. Southern Road expanded and introduced a new way of writing Black vernacular poetry and folk poetry, and was canonized as part of the artistic tradition of the Harlem Renaissance. Equally, Ellington began to appear in films and gained international fame as a composer and pianist alongside his all-Black ensemble. The achievements of both men, in literature and music, enhanced Black cultural production and transcended racial barriers.

SAB is to poetry and prose what Duke is to big band jazz. Both SAB and Duke were creatives, forward thinkers, and hometown heroes of Washington D.C. In 1971, both men were awarded honorary doctorate degrees from Howard University aka“The Mecca”.

To celebrate the bond between SAB and Duke, the Special Collections has created a playlist titled Friendship Heights, a nod to their friendship and the northwest neighborhood in D.C. The playlist is composed of Duke Ellington records that appear in the rich Sterling A. Brown record collection.

Select Williams facilities and events are open to the public. Admission tours are available and guests are welcome at the Williams College Museum of Art, Sawyer and Schow Libraries and outdoor athletic events. Visitors are also welcome at indoor competitions and some performances and events. Proof of vaccination and masking are required for entry. See the Visiting Campus page for details.