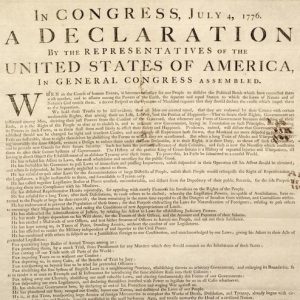 Our program of readings begins with a brief document of local interest. On May 10th, 1776, the Massachusetts legislature, called the General Court, asked the various towns of the state each to consider whether its people would support a declaration of independence by the Continental Congress, then meeting in Philadelphia. Williamstown replied on June 24th, sending its consensus under the name of Town Moderator Nathan Wheeler. In our program, the town’s response is read by local historian Dusty Griffin.

This will be followed by a reading of the Declaration of Independence, from the text passed on July 4th, 1776, when it was not yet a “unanimous declaration” – the delegates from New York State having abstained from the voting. The Declaration is read by Williams College faculty, staff, and families, organized by Gretchen Long, Professor of History.

Next, Chris Waters, the Hans W. Gatzke, Class of 1938 Professor of Modern European History at Williams, will read a rare document sometimes called the British reply to the Declaration. This was a text issued by Admiral Lord Howe and General Howe, the King’s Commissioners for Restoring Peace in North America, on September 11th, 1776, speaking directly to the people when a late appeal to the Congress – basically, a demand for surrender – failed to stop the fighting. It was too little, too late, more than a year after Lexington and Concord. The “constitution” referred to at the end is the government and laws of Great Britain, embodied in King George and Parliament.

Finally, Michael Obasohan, who has been part of the Williamstown Theatre Festival’s Community Works initiative as an actor and choreographer, will read excerpts from a speech by Frederick Douglass, “What to the Slave Is the Fourth of July?” Douglass was born into slavery, escaped to the North, and became a noted abolitionist, speaker, writer, and diplomat. In 1852, when he delivered these words in Rochester, New York, African-Americans like himself did not have the freedom and independence praised in the Declaration, and of course that freedom is still in question today.

What does the Declaration of Independence mean to you?
Openings: [re]turning to Special Collections
Libraries MENU

Please visit the Covid-19 website for the latest information, including details about vaccination, testing and mask requirements, and travel.