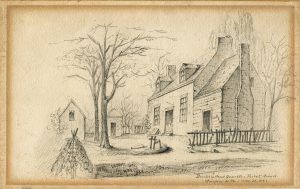 Two lovely, anonymous graphite drawings in the Chapin Library’s collection, likely done by the same artist, come to us from the earlier years of the American Civil War. Each depicts, with an uncommon degree of skill and subtlety, a Virginian manor, one readily identifiable and still standing, the other unknown and likely since demolished. Both drawings, moreover, seethe quietly with the creeping costs of a war which was just beginning.

The only sketch of the two dated by the artist was drawn on November 23, 1861, and depicts (according to a caption scrawled at the bottom) “‘Burke’s’ Head Quarters” in Fairfax County, Virginia. Empty of life save for a few shedding trees and one slowly desiccating vine crawling up the façade of the largest depicted structure, the drawing nevertheless indexes the bustle of belligerence that was then overtaking Virginia: the manor is in waxing disrepair, cracks forming above one lintel; fenceposts are snapped; the caption beneath refers, oddly, to a “picket guard,” or a unit of soldiers placed near the front lines to warn of enemy advances. 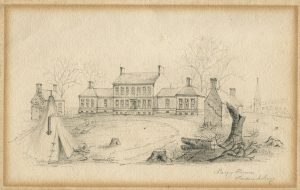 While the other drawing is no less lifeless and obscure, its scant caption helps contextualize its companion image. At the bottom, it reads, “Lacey House, Fredericksburg,” a misspelling (or alternate spelling) of the surname of James Horace Lacy, the proprietor of the pictured plantation from the late 1850s until 1872. Along with his family and some select slaves (most of the hundred or so were left behind to tend to the property), Lacy fled Virginia at the outset of the Civil War. His manor and its grounds were used to house Confederate troops for much of the war, which is signaled here by the sole teepee drawn in the sketch’s lower left corner. Curiously, the artist (who was perhaps a Confederate soldier himself) limited his depiction of the troop’s occupation to this one uninhabited tent; as with his drawing of the Burke Headquarters, the artist has skillfully decided to focus on the slight traces of war in the inert matter, built or otherwise, of the landscapes it overtakes. In these remarkable pictures, battle is registered as a slight trail of graphite marking a crack on a house’s sturdy side; death as two unremarkable graves on the solemn, stately property of a southern slaveowner.

Powerhouse Cartoonists of the Gilded Age
What does the Declaration of Independence mean to you?
Libraries MENU