Powerhouse Cartoonists of the Gilded Age 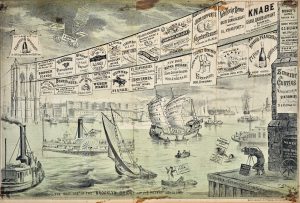 Joseph and Udo Keppler were the father–son powerhouse of satirical cartooning in 19th- and early-20th-century America. Joseph, the elder, was an Austrian immigrant who cut his teeth on mid-century cartooning for mostly German-language publications in St. Louis and New York City. His legacy as one of the 19th century’s most notable lithographers, however, would be cemented in 1877, when he began publishing the satirical magazine Puck  in English (he founded Puck in 1871, but published it only in German). For Puck, which ran continuously until 1918 and came under Udo’s control after his father’s death in 1894, the Kepplers created some of the most recognizable and influential political cartoons of America’s Gilded Age. They are especially well-known for their ongoing critique of the political corruption surrounding Tammany Hall.

The Chapin Library holds four Keppler cartoons, two by Joseph and two by Udo. The earliest of the four, by Joseph, likely comes from the late 1870s, and is a dual critique of advertisement-happy American culture and the sluggish rate at which the Brooklyn Bridge was being constructed. The print’s title, The Best ‘Use’ of the Brooklyn Bridge in Its Present Condition, refers to the structure’s halting progress: the first caisson was begun in 1870, but the bridge would not be complete until 1883. For some time, the “bridge” consisted only of two towers and some wire strung between them, from which Keppler, with tongue in cheek, suggested in this lithograph be strung ads for everything from yeast to photography studios. 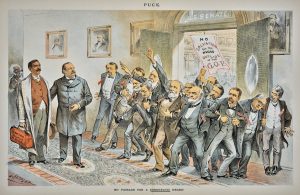 The other Joseph Keppler print held by Chapin is from about a decade later, in 1887, and is titled No Passage for a Democratic Negro. Published in Puck, it shows a scene of Republican hypocrisy playing out in the U.S. Senate. Grover Cleveland attempts to escort the first African American Recorder of Deeds for the City of Albany, the Democrat James Campbell Matthews, into the chambers. The pair is stopped by a gang of seething progressive statesmen who, enraged that a Black man could be on the other side of the aisle, bear a banner that reads, “No Salvation for the Negro Outside of the G.O.P.” 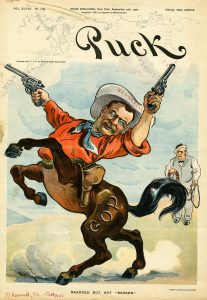 Chapin’s two prints by the younger Keppler — one from 1900, one from 1913 — show Udo carrying his father’s mordant torch into the 20th century. The earlier depicts Theodore Roosevelt as a centaur, guns blazing, rearing back, and grinning madly; the print was a cover for Puck. At the time of this print’s publication, Roosevelt was campaigning energetically for the White House as Vice President under an incumbent McKinley. Behind the soon-to-be Commander in Chief (who would ascend to the role in late 1901 after McKinley’s assasination) the then-president’s most influential advisor, Mark Hanna, is shown edging sheepishly towards the beastly Roosevelt. A known detractor of the untamable politician, Hanna appears in this image to have decided against lassoing Roosevelt; it would just be too much trouble. 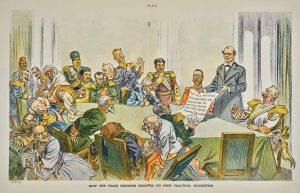 The latest of Chapin’s Keppler prints, also from Puck, shows Winston Churchill, then the First Lord of the Admiralty, proposing at a congress of European and Asian leaders multilateral disarmament for the then-raging conflict in the Balkans. With characteristic Kepplerian drama and busyness, the throng of leaders meets Churchill’s suggestion with a blend of disaffectedness and theatrical revulsion.