The Devil and Brother Jonathan

C.J. Grant was a British satirist with Radical sympathies, whose political engravings saw success in the 1830s. Typically taking a hostile stance against the policies (and often the persons) of more conservative Whig and Tory politicians, Grant’s prints championed working class suffrage and political reform. 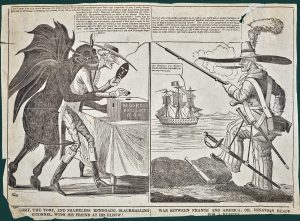 In a rare wood-engraved cartoon by Grant held in the Chapin Library, two seemingly unrelated cartoons sit side by side on one page. Text-heavy in the satirical style of the day (American political cartoonists, especially, would come to be quite a bit pithier in the decades to come), the print contains an image, on its left side, of the devil coercing a gaunt conservative into voting against the Radical candidate, and a scene on its right of a rip-roaring soldier hoping for war between France and the United States.

The image on the left shows a maniacally grinning demon guiding the hand of an emaciated and rather despondent-looking voter toward the ballot box. Beneath, a caption reads, “Old Glory, the Tory, and Shameless Renegado, Blackballing O’Connel, with His Friend at His Elbow!” The Tory and renegado, of course, is the hapless voter, and “His Friend at His Elbow” is the hellion, while “O’Connel” refers to a character in the real world: Irish politician and Repeal Association member Daniel O’Connell. Caricaturing O’Connell’s opponents was in line with Grant’s politics: O’Connell, nicknamed The Liberator, was a famed abolitionist, champion of Catholic emancipation, and general stalwart for political reform in the United Kingdom. The text box above Old Glory’s head refers to the monotony of the moral consistency required for reformism.

The image on the right, minimally related to that on the left, shows an eager soldier, musket held high, gazing out at a French ship at sea. Likely an eager American bumpkin, the man on shore meets the cries from the men off-coast — “Old Hickory!” they say, “you Yankey Doodle swindler, pay what you owe us,—or . . .” — with a belligerent screed full of anti-French epithets and chest-beating war cries. Labeled “War between France and America; or, Jonathan Ready for a Rumpus,” the image refers to tensions between the two countries which arose during the administration of Andrew Jackson (nicknamed Old Hickory) as a result of disagreements over spoliation claims following the Napoleonic Wars. The frequent early representation of Americans as Jonathan, or Brother Jonathan, often depicted wearing striped trousers, ultimately gave way to the familiar figure of Uncle Sam.

The appearance of these two images together on the same page helps us date the print to sometime around the end of 1832. O’Connell was successful in the parliamentary elections of July 1828, December 1832, August 1837, and July 1841, only one of which fell within the window of American-French tensions, which lasted from 1831 to 1835.