In April of 1789, President-elect George Washington made his way from his home in Virginia to the young country’s then-capital, New York City, for his inauguration on the last day of the month. He made frequent stops along the way to greet his numerous supporters. The most represented of these jaunts has become his day in Trenton, New Jersey, where thirteen years earlier he had led a somewhat small but plucky group of revolutionary soldiers in a successful battle against Hessian mercenaries, which was significant in turning the tides of the war. As he passed through the site of the battle in 1789, he was greeted by a group of women and girls who sang for and threw flowers at the feet of their new president. A banner which they slung across a recently-erected triumphal arch read, “The defender of the mothers will be the protector of the daughters.” 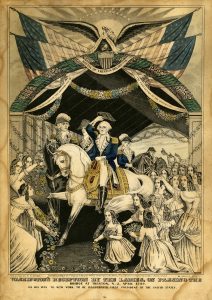 Two nearly identical prints held in the Chapin Library, both from the middle of the 19th century, depict “Washington’s Reception by the Ladies.” Likely the earlier of the two, Nathaniel Currier’s lithograph was published in 1845, and became a popular addition to his firm’s catalogue of similar commemorative prints. Hand-colored, the print shows Washington surrounded by laudatory (if somewhat stiff and leaden) young girls, who throw flowers at his feet and present him with garlands. Above him is the arch in his honor, decked in flowers and upholding the praiseful banner. Another lithograph, designed by D. Needham and published by the Kellogg Brothers (New York rivals of Currier), was likely released after Currier’s print to capitalize on its popularity, and changes few of its characteristics. Washington’s horse, somewhat more sculpted, here faces right instead of left — in fact, much of the scene, including the arrangement of flowergirls and to a lesser extent Washington’s attendants — has been flipped horizontally. The banner at the top, as well as the flower-clad arch from which it hangs, remain in the Kellogg copy.

The basic composition of the new president’s reception — of Washington on horseback, flanked by flower girls, raising his hat, beneath a celebratory banner, before a cohort of attendants — was devised in fact by the reception’s first lithographer, Thomas Kelly, around 1830. Nearly all of the prints commemorating the occasion from later in the 19th (and occasionally into the 20th) century copy Kelly’s arrangement down to the smallest detail. Kelly’s original engraving, however, did not have the same success as Currier’s or the Kelloggs’; perhaps this is because, in 1840, interest in the historical event was renewed with the announcement of plans for a statue to be erected in remembrance of Washington’s passage through the town. Until the early decades of the 20th century, popular representations like Currier’s, derived from Kellogg’s print, kept the scene alive in the popular imagination. A painting by N.C. Wyeth, from 1930, attests to this fact: folksy and active as any of his works, the picture copies closely the composition devised by Kelly some one hundred years earlier.

Fragmentary Remains: Books of the Dead at Williams College
Discussion of essay “Reading in the Age of Distrust”
Libraries MENU