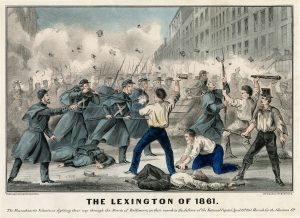 Eighty-six years to the day after the storied battles of Lexington and Concord in 1775, a similarly symbolical scuffle took place in the streets of Baltimore. A week before, on April 12th, the Civil War had begun with the Battle of Fort Sumter in Charleston, South Carolina, which saw no casualties. In the days that followed, northern soldiers were shuffled rapidly south, especially to Washington, DC, which was under significant threat from forces in neighboring Virginia. On April 19th, a regiment of DC-bound soldiers from Massachusetts, making their way through Maryland, was stopped by a mob in Baltimore. The spat which ensued, dubbed the Pratt Street Riots (or the Pratt Street Massacre, by the Confederates), left four soldiers and twelve rioters killed. As had the Battle of Lexington marked the beginning of the Revolutionary War on the same late-April day nearly a century earlier, this “Lexington of 1861” saw the first bloodshed of the Civil War.

This headline-ready appellation for the strife in Baltimore comes from a print by the popular lithographic firm Currier & Ives published soon after the incident, a copy of which is held by the Chapin Library. Made for a decidedly Union-supporting audience (Currier & Ives was based in New York City), the hand-colored print shows a mass of soldiers, rifles for the most part pointed peacefully skyward, beset by soaring bricks and pursued by a looming dust cloud. The soldiers in the midground, caught clearly off guard, are flustered and scrambling — one falls into his companion’s arms, another jerks his neck as though he’s been struck — while the few in the foreground, the only ones colored-in, recognize the situation. Accosted by a small group of barbarous, club- and brick-yielding Democrats, the Union men surge towards their attackers with guns drawn. Lest the image be misread as depicting an act of unjustified aggression, a caption below reads: “The Massachusetts Volunteers fighting their way through the Streets of Baltimore, on their March to the defense of the National Capitol April 19th, 1861. Hurrah for the Glorious 6th [Massachusetts Militia].” 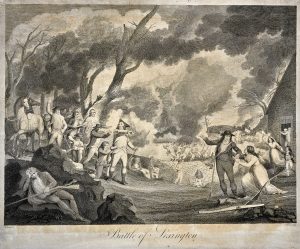 Another print in the Chapin collection, engraved by Cornelius Tiebout in 1798 after a painting by the Connecticut artist Elkanah Tisdale, recalls the original Lexington with patriotic reverence. In the background houses burn, and a smoke envelops the image from its top to its center. Here, the gray cloud meets a battalion of Redcoats in disarray. Their orderliness, especially as they retreat, is evidently no match for the impassioned Americans who busy themselves in the foreground: a roughshod gaggle of American soldiers on the image’s left aim their rifles and appear prepared to charge; a group of men in the center, their fallen comrade by their side, take a moment to mourn before engaging again in battle; a man and a boy to the right valiantly usher some women to safety. Oddly, a young soldier in the image’s bottom left is slunk sadly behind a rock, his musket in his lap and his head cradled in his hands — likely he is distraught from the fighting, though he has an unmistakable contemplative aspect. The later Lexington as depicted by Currier & Ives seems to have been a much less philosophical affair; perhaps it’s not till a war that depictions of it can be anything but propaganda.