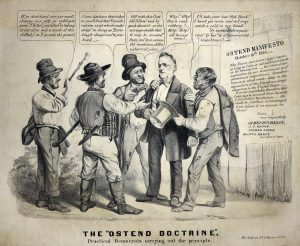 The firm Currier & Ives was among the most popular and influential, not to mention prolific, purveyors of images in 19th-century America. Nathaniel Currier, its founder, learned the then-young trade of lithography in the early years of the 1830s, when he was a teenage apprentice for a Boston shop owned by William and John Pendleton. (The new printing technique of lithography had been invented barely three decades earlier, in 1796, and was only beginning to migrate from Germany to the States by the time Currier was learning the ropes.) A talent for the art and some good business decisions put Currier, by 1835, at the helm of an eponymous and, eventually, unprecedentedly successful lithographic practice: N. Currier, Lithographer. His penchant for inventing or adapting scenes that would be appealing or captivating to an increasingly image-hungry American public, as well as his artistic ability and a bit of acumen, brought his firm success in mid-century.

It wasn’t until Currier took on bookkeeper and operational savant Jim Ives — who in 1857 became a full partner in the business, thereafter called Currier & Ives — that the firm began to soar. With Ives came thoroughly modern business and production practices, including most notably an assembly-line style of crafting and coloring their prints, most of which were hand-colored by a group of young, recently immigrated German women. This allowed the firm to drastically increase its production and distribution of its lithographs of historical scenes, newsworthy events, and popular American life.

Chapin Library has a number of prints from the firm, from both the pre- and post-Ives periods. While Currier & Ives are perhaps best remembered for their visual reportage and quiet, contemplative scenes of daily life, an interesting few prints with decidedly political bents are highlighted here.

In The “Ostend Doctrine”, Practical Democrats Carrying Out the Principle, which was released around 1854 and executed by Louis Maurer, an expat German who was on the firm’s payroll for most of the 1850s, a group of four ruffians accost future president James Buchanan, who was then the ambassador to the United Kingdom. Buchanan was involved with drafting the print’s titular doctrine in 1854, which proposed that, should Spain be unwilling to sell Cuba to the United States, the latter would be justified in stealing it. In Maurer’s witty image, the robbers menace Buchanan with the same words he helped draft in the Ostend Manifesto. 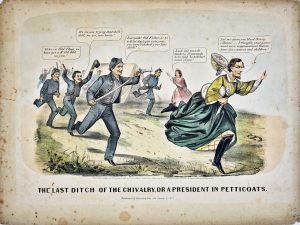 A print from a decade later, published this time by Currier & Ives, is no less snappy but quite a bit more enticing visually, bearing a more involved composition and complete coloration — perhaps this difference can be attributed to the changes Ives brought to the firm throughout the later 1850s. Titled The Last Ditch of Chivalry, or A President in Petticoats, the lithograph illustrates a bit of Civil War apocrypha: it was said at the time that, when Union soldiers came through to roust Confederate President Jefferson Davis from his home, he had time in fleeing only to grab some of his wife’s clothing. The image then proliferated of a defeated Davis fleeing Union soldiers dressed like a woman; here he shouts, “Let me alone you bloodthirsty villains. I thought your government more magnanimous than to hunt down women and children.” 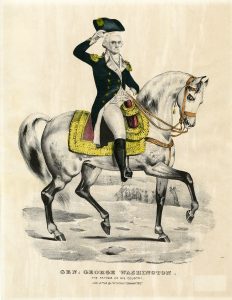 A print titled Gen: George Washington. The Father of His Country, also from the N. Currier period, shows the firm in a markedly more reverent register than the previous two. With a faint battle scene in the background, a hand-colored Washington on horseback tips his hat to the viewer. Washington was a favorite subject throughout the life of the firm, serving as an easily identifiable and universally popular patriotic metonym. Where the former two prints served definite political functions, images of Washington like this one were intended to have an ecumenical and uncritical appeal for all Americans.

Health and Wellness at Schow
The Two Lexingtons
Libraries MENU