Eugéne by the River 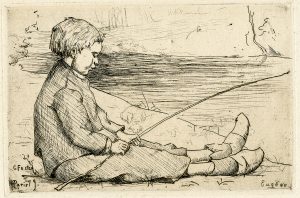 In this humble etching in the Chapin Library’s art collection, by the Maine-born artist Charles B. Foster, a young boy — the titular Eugéne, one presumes — sits beside a river, fishing. Hastily rendered, the print bears a background that is hardly more than a few scratched lines in the faintest suggestion of topography. The river, static-seeming, is a depthless shadow of scribbled black horizontals. Even Eugéne’s companion, a small sleeping dog beside him, is an apparition faintly outlined, quite literally an afterthought: we can see the riverbank cutting right through the dog’s curled, transparent back, though it doesn’t seem much to mind.

Even Eugéne, the print’s most defined figure, has see-through fingers wrapped desultorily around his fishing pole, and clothes that have been quickly hatched into existence by the artist — Foster, a student at the time, clearly made this print on the fly. The young sitter’s face, however, is markedly more delicate and particularized than the print’s remainder, though it is still certainly offhand. Its fluttering eyelids are given over to fine, well-placed shadows and cede, sloping, to a softly drawn nosebridge and nose; its puffing cheek, whose simplicity (it’s signified by just one bold convex) is undercut by a swirl of elaborating marks behind it, turns the visage, along with the boy’s soft physiognomy in profile, into the mark of a small but sure personality. With his face poised for (or perhaps in the process of) a satisfying exhalation — eyes shut, lips pursed, cheeks taut — the boy appears emphatically as the center of the etching’s minimal action. Every dim contour of landscape, each slight motion in the river, is synced with the sway of his face: a small crop of hatched marks in the river, the only lines in the whole thing moving other than horizontally, dance near the boy’s mouth, giving the whole scene the appearance of tumbling forth from his one lazy breath. Eugéne is an untroubled print, a simple image of boyish contemplation.

Foster etched it in 1879, while he was a student at the École des Beaux-Arts. Though he most frequently painted landscapes, this print is a pleasant portrait, even an instance of uncomplicated, unacademic humanism, from the artist abroad. The following decade, Foster returned to America and settled in Connecticut, where he painted till his death in 1931.