A Paragon of Political Satire

Thomas Nast was a paragon of political satire in 19th-century America. Cartooning for the popular New York-based magazine Harper’s Weekly from 1864 to 1886, Nast’s penchant for the indelible and the mordant made his images of political and cultural critique among the most influential of America’s postbellum decades. Indeed, it is often said that Nast’s cartoons contributed (more or less decisively) to the outcomes of six consecutive presidential elections. The four examples of Nast’s work held by Chapin Library demonstrate the cartoonist’s typical incisiveness, but also his sensitivity and range. 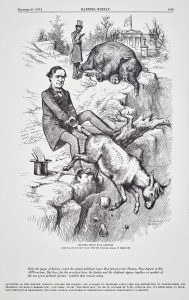 Two of these are characteristic bits of satire, one from 1879 and one from 1880. The former is among Nast’s most famous, or at least portentous, illustrations: it is the first image to have depicted the Democratic Donkey and the Republican Elephant together. (Nast had created the donkey symbol in 1870, and the elephant in 1874.) In the foreground, Senator Thomas Bayard, a presidential hopeful, yanks at the tail of his party’s donkey, who is plunging headlong into a chasm labeled “Financial Chaos.” Behind him, Treasury Secretary John Sherman stands sullenly beside a bloated, sleeping elephant whose head is plopped next to a rock reading “Let-Well-Enough-Alone.” The image plays out Nast’s take on an important debate for the 1880 presidential election, which concerned the government’s adoption of paper currency or silver over the gold dollar. Interestingly, Chapin’s copy of this illustration is not from the period, but rather a reprinting made in 1960 and distributed by Travelers Insurance on behalf of CBS to advertise a political documentary the latter was airing! 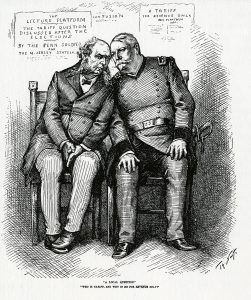 The cartoon from 1880 is arguably even sharper. Nast has shown Democratic presidential hopeful Winfield Scott Hancock leaning into the ear of the influential newspaper editor Horace Greeley. Lampooning Hancock’s apparent ignorance of political topics, Nast has depicted him whispering to Greeley, “Who is Tariff, and why is he for revenue only?” 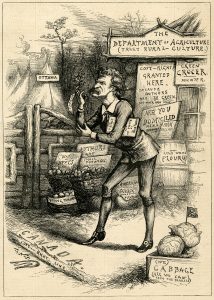 The two other Nast pieces held by Chapin Library show the illustrator somewhat outside of his political register. One has the cartoonist reveling in wordplay: Mark Twain, who had recently been denied Canadian copyright for The Prince and the Pauper, stands disgruntled on the north side of the border, looking back at his home country. Behind him is a small shack labeled “The Department of  Agriculture (Truly Rural-Culture),” where a sign tells us that copyrights are granted because “authors are so green and never grow stale.” Surrounding Twain and the copyright stand are stacked crates and sacks of produce, emblazoned with some truly unforgivable puns: “(‘Dead’) Beets,” “Authors are Small Potatoes,” “Lily White Flour,” “(We) Cabbage (All We Can from the Yankees).” 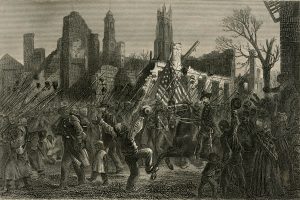 The last of Chapin’s Nast works comes from much earlier in the artist’s career, and is markedly more serious. An engraving issued around 1865 to celebrate the conclusion of the Civil War, Nast’s print shows the 55th Massachusetts Infantry Regiment marching through a crumbling and abandoned Charleston, South Carolina on February 21, 1865. The 55th was the second all-Black regiment in the Union, and they are shown here celebrant but a bit apprehensive, marching to the left of the picture plane. They look back at a crowd of cheering and soon-to-be-liberated Black Charlestonians, who raise their hats and hands high into the air as, before the crumbling facade of a building, the soldiers walk by.

Is information literacy enough to navigate an age of disinformation?
Eugéne by the River
Libraries MENU