Out and About with Outing 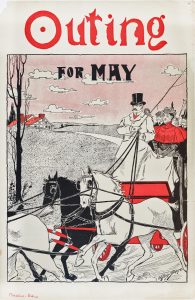 During America’s Gilded Age, the advent of a new managerial class quickly begot that class’s rapacious interest in sports and sporting. Baseball, basketball, tennis, and golf. Bike rides, carriage rides, and eventually car rides. Anything outdoors and active, spectatorial or slightly thrilling, came to serve as leisure for this new bourgeoisie whose low-impact, medium-yield jobs left them with time to kill and money to blow.

Outing, a Boston-based magazine which was founded in 1882, was among the most popular publications which cropped up to accommodate the craze. Other prominent magazines included Sporting Life, Sporting News, Sports Afield, and New York Clipper. Outing, whose average circulation reached above 88,000 at its peak in the 1890s, was among the classiest and most widely read. Initially a cycling magazine, the serial morphed over its lifetime into the foremost popularizer of “field sports” like hiking and angling — in the words of historian John Rickards Betts, it was perhaps “the most responsible magazine for acquainting the public with the wonders of life in the mountains, the lakes, the forests, and the streams.” 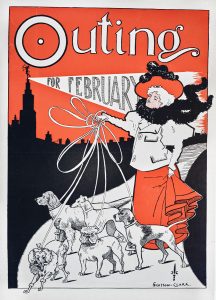 Looking at the two Outing posters held by Chapin Library, both from the 1890s, it’s hard to imagine the magazine’s readership having much interest in mucking themselves up in the Great Outdoors. In one of the posters, designed by illustrator Willard Bonte, a finely dressed gentlemen tugs on the reins of a fleet of sturdy-looking horses; on the carriage behind him, a cohort of much pleased cruisers, breathing in that thick country air, is dressed to the nines. In the other, a beautiful dog-walker’s scarf billows in the February breeze. She’s on a path outside of the city with her back to the skyline, and she lifts, daintily, with one hand her skirt and the other a tangle of leashes. She seems on her stroll to be just far enough away from the city, and she’s having a splendid time.

The Humours of a Country Wake
Is information literacy enough to navigate an age of disinformation?
Libraries MENU