The Humours of a Country Wake 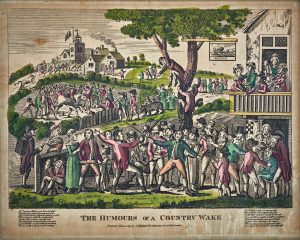 “A Country Wake you here behold / Gentle and simple, young and old.” As if! Flirting and fighting, smoking and cajoling, interspecies revelry and booze galore — this commemoration seems anything but funereal.

John Marshall, the publisher of this hand-colored etching held by the Chapin Library, was well-known in late 18th-century England for the children’s literature he produced, but this scene from 1794 is hardly fit for kids. As the cheekily descriptive poem at the base of the page describes, this country wake seems to have been quite a bit like Finnegan’s. There’s “hand’ling cudgels, breaking sculls,” a crazed “mob at a bull baiting,” and much more drunken jubilation besides. In the background, one of the bulls has escaped and is chasing a group of its erstwhile tormenters towards the town. In the midground, a monkey rides on the back of a muzzled bear; the procession is led by a fifer who looks on with concern at the bullfight to his right. “[M]ore pleasing to the mind,” however, is a gaggle of young lovers that can be seen “dancing on the green sword grass” — not all the debauchery was violent!

The raucous “country wake” was a minor type in the 17th and 18th centuries, serving as subject for several similar prints and even a comedic play from 1696 (Thomas Doggett’s The Country Wake). In a print from the same year as Chapin’s held by the British Museum, for instance, two haggard men in competition guzzle down some hot pudding for the prize of a “gold-laced hatt.” A more realistic engraving from a few decades earlier, after a painting by the 17th-century artist Isaac van Ostade, is shorter on the fantastical elements but not lacking in inebriated merriment.

Black Americans in the U.S. Congress
Out and About with Outing
Libraries MENU