Black Americans in the U.S. Congress 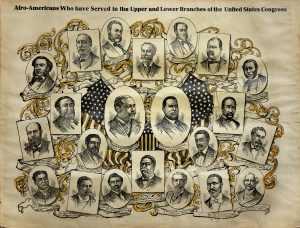 Hiram Revels was the first Black American elected to the United States Congress, serving as a senator from Mississippi between February 1870 and March 1871. Staunch and serious, he shares in this commemorative print held by the Chapin Library the honor of largest and most central portrait with Blanche K. Bruce, the first Black senator to serve a full term and the last whatsoever till 1967. They are environed by portraits of twenty other congressmen, who altogether comprised a cohort of Black Americans who served in Congress between the dawn of Reconstruction and the institution of Jim Crow.

Praised as the “fifteenth amendment in flesh and blood,” the majority of these men (all of whom, except Blanche and Revels, served in the House) were elected in the two decades following the Civil War. In several Southern states and many congressional districts, newly-freed Blacks constituted a majority of voters. While these Black voters were certainly embattled from the outset, the presence of Union troops and the weakness of Southern Democrats following the Civil War mitigated the disfranchisement that would increase steadily towards inhumanity over the next few decades, especially after the Compromise of 1877. In the two decades following the Civil War, while Black voters enjoyed a semblance of their recently conferred right to vote, fifteen of the twenty Black congressmen who served in the 19th century were elected. The next two decades would see only five.

If less in form than intent, this print has a nostalgic, somewhat melancholic element, hailing as it does from the nadir in Black representative politics which followed this period. The late-19th-century retreat from the Reconstruction era’s push to ensure Black Americans’ rights — which was marked, for instance, by the judicial death of 1875’s Civil Rights Bill in 1883 and the inauguration of the separate but equal doctrine following Plessy v. Ferguson in 1896 — meant that the relative surge of postbellum Black representatives would turn to a trickle by the late 1880s and be plugged completely by the turn of the century. From 1901 to 1929, no African Americans served in the United States Congress. This was a result of the Democrats’ return to prominence in the Southern states and the concomitant enforcement of Jim Crow. The final Black representative from before this dark period, North Carolina’s George Henry White, served in the 55th and 56th Congresses (1897–1901). He is pictured here on the bottom row, in the second frame from the left.