One of the 19th century’s most indelible caricatures — a hilariously unrelenting image of haplessness and blissful ignorance — was made after a man largely undeserving of such unfortunate remembrance. Warranted or not, though, the English reverend William Gilpin got thoroughly roasted by William Combe and Thomas Rowlandson in their Tours of Doctor Syntax (1809–1821). 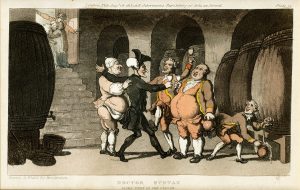 Gilpin, who died in 1804, was a schoolmaster and cleric well-known for popularizing the term “picturesque” in the final decades of the 18th century. To him we owe the phenomenon of the resourced tourist roving through the English countryside in search of a nice view — think, for instance, of Pride and Prejudice, whose author was a longstanding fan of both Gilpin and his caricaturists — as well as a great deal of 19th-century landscape painting and its associated theories. While indeed Gilpin himself was a serious thinker involved earnestly in the groundswell of aesthetic philosophy occupying much of Western Europe at his time, his ideas at some angles do smack of a somewhat hokey simplicity. To the undiscerning (or perhaps unsympathetic) reader, his suggestion that picturesque beauty — the beauty which lends itself best to artistic representation — resides in a sort of mystically decrepit “roughness” could readily seem rather clunky and Manichaean. And especially in light of the droves of vacationers scouting out crumbling castles and rough-hewn vistas in Gilpin’s wake, his notion of the picturesque seemed, by only a few years after his death, ripe for teasing.

And tease is just what Combe and Rowlandson did. The first appearance of their Doctor Syntax, in a “pleasantly unreadable,” not-so-epic poem, was in Ackermann’s Poetical Magazine in 1809, reprinted in a book version in 1812. In this, Syntax (a thin, thinly veiled caricature of Gilpin) clops about the countryside like an even less couth Don Quixote, looking for pretty landscapes to sketch but having his quest ruined by boilerplate misadventures — bull-chases, prurience, insobriety, falling into ponds. 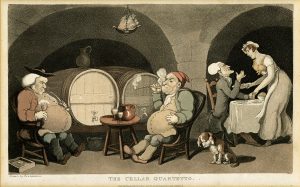 Combe was the author and Rowlandson the artist (it has been suggested that the art came first), and the two separate prints in the Chapin Library — one for the first Syntax volume (The Tour of Doctor Syntax: In Search of the Picturesque, 1812), and the other for its third (In Search of a Wife, 1821); all three books are in the Chapin — have the latter’s visual trenchancy on full display. The Cellar Quartetto, for volume three, is an image of pure indulgence, wherein the gaunt and rather lecherous Syntax grabs the hand of his waitress while his glutted companions smoke and drink behind him; a dog in the foreground gazes at the ground, as if ashamed. Doctor Syntax, Made Free of the Cellar, for the first Tour (but an issue of 1813), is rather more jubilant, but no less sharp; having finished dinner in the picture gallery of a wealthy, curious host to whom he could give few straight answers about the quality of his art collection, Syntax is led by a servant into the cellar where they keep the beer. Reveling with the “yeomen,” Syntax has much more to say.