In the early 1930s, the celebrated wood-engraver Clare Leighton bought a patch of unpromising land in the Chilterns, a picturesque escarpment in the English countryside. Along with her partner Noel Brailsford, who like Leighton had little gardening experience, she cultivated her enclosure painstakingly and largely by trial and error. Much of Leighton’s artistic output to this point consisted of dynamic, sculptural prints of men and women working the land — planting and harvesting, as many commentators have observed, in a state of unencumbered, timeless toil. One can readily imagine the artist in her garden as one of her own engraved subjects, laboring productively, even metaphorically, her hands thrust into the earth, environed by a verdure of her own creation. In mellifluous prose, Leighton chronicled her garden path to a fecund garden as she learned, publishing an account in 1935 as Four Hedges. 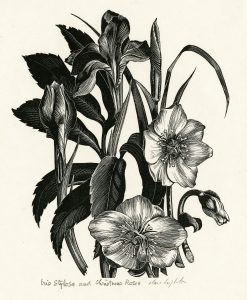 Leighton’s prints of rural laborers are deeply humanist and expertly wrought, as hardy and terrestrial as they are reverent and idealist. In contrast, the two separate wood-engravings of hers in the Chapin Library — both from the mid-1930s — are quaint registrations of the natural world with which the artist was becoming acquainted throughout the early years of that decade. One shows a bird nestled snugly in a flowering shrub; the other depicts a wily patch of Christmas Rose and Algerian Iris. No less empathic than her work with human subjects, these prints replace the motive intensity of her typical work with the slow, bucolic contemplativeness which colored the artist’s life in the Chilterns. More compassionate and curious than rote botanical illustrations, these wood-engravings read like complements to Leighton’s more embodied interactions with nature in her garden.