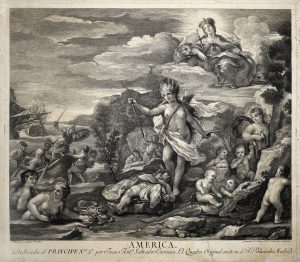 All four of the paintings in Luca Giordano’s late 17th-century series The Four Parts of the World were destroyed in the turbulence that brought Portugal out of authoritarian rule in 1974 — a fire at the Spanish embassy in Lisbon, where they had been lent by Spain’s heritage agency Patrimonio Nacional, did them in. Thankfully, these allegorical depictions of each of the four then-known continents (Africa, America, Asia, and Europe) were popular enough to be dutifully copied many times throughout the centuries, perhaps most famously by Juan Antonio Salvador Carmona in the late 1700s.

Carmona’s engravings were dedicated to the Prince of Spain, an act of sycophancy which earned the artist the role of court engraver once Charles ascended to the throne in 1788. Giordano’s aggrandizing illustrations of European expansion would surely have served as fitting scenes with which to flatter a monarch: in the image for Europe, a magisterial woman, surrounded by putti and approached by an angel, lounges on a throne before the scattered attributes of civilization (an easel, fine cloth, books and scrolls, a globe); in the other pictures, the feminine encapsulations of the other three continents, shepherding their hapless peoples, are accosted by Europe’s overeager conquerors.

In Carmona’s engraving America, of which the Chapin Library holds a fine copy, an empyreal figuration of Spain peers down knowingly from on high as her country’s troops reach America’s shores. Worriedly, America — naked save her headdress and billowing sash — ushers her unclad populace back from the shore. At her feet, a squat man already lies dead on a rock, his head pierced by an arrow. With one well-armed and looming soldier preparing to leap from his boat, America’s wide-eyed aspect seems chillingly to index not only the one death at her feet, but the many more sure to come.