Robert Riggs at the Circus 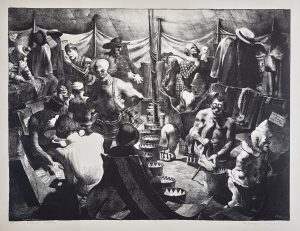 Robert Riggs, born in 1896, reached the peak of his popularity in the middle of the 1930s. As the Depression raged, prints increased in popularity. They were inexpensive and accessible in comparison to other artistic media, and their populist pedigree made them the ideal format for depicting vernacular, relatable subjects. Riggs’ lithographs were of this idiom: best known for his scenes of hospitals, prizefights, and circus performances, the Decatur-born Art Students League-trained artist made stark, earthy works for a mass audience. 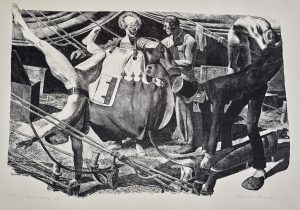 The four of Riggs’ circus scenes in the Chapin Library’s Graphics Collection display a tension between entertainment and labor characteristic in much of the artist’s work. His many performers – men in pig suits and sailor costumes, done-up clowns walking tightropes or stuffing themselves into props, tumblers and acrobats testing death – are clearly here for an audience’s unencumbered pleasure, but the artist’s odd framings and unlikely choices of scene denature this circus just enough to give its onlooker pause. 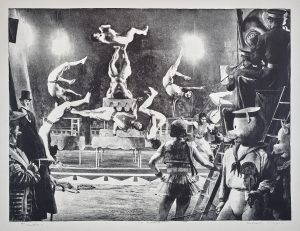 A scene of spinning acrobats, for instance, is shown not straight-on but slightly obscured, from inside the depths of some dim passageway. The backs of entertainers and audience-members alike interrupt our pure taking in of the performance, and recast the role of these actors as something other than sheer spectacle. 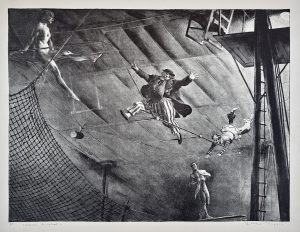 In another print, a rotund clown walks the wire, arms outstretched and flanked by trapeze artists. It seems as if there’s a smile on his face, but the oblique angle from which he’s seen makes him look foreshortened and weird; the print’s whole background is a field of dull gray ceiling, and the whole left corner is occupied lazily by a sloping safety net. From this vantage, the clown’s precarity is less a source of excitement than a cause for anxiety. The simulated danger of his highwire act seems almost to supplant the real tribulations in the impecunious life of a circus performer, which is perhaps an element of what drew Riggs’ 1930s audience to these darkly realist scenes.