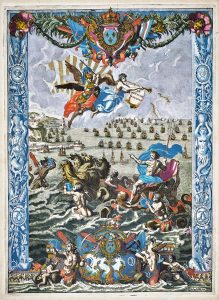 Le Neptune françois is a nautical atlas from 17th-century Holland often hailed as standing among the most intricate and beautiful ever published. Its elaborate decorative title-page, of which Chapin Library holds a fine version, is a convincing indication of the atlas deserving such praise. Hand-colored in arresting blues and reds and finely wrought by the draughtsman Jan van Vianen, the engraving depicts Neptune, drawn in his chariot by four rearing hippocampi, leading a fleet of warships over the horizon. From a parting in the clouds, two angels descend on the scene pugnaciously. One blows a horn from which lightning appears to strike and sink the fleet’s rear-guard, while the other brandishes his sword.

Interestingly, the atlas was an embellished copy of a contemporary French book, whose measurements had been undertaken the previous decade at the behest of the French statesman Jean Colbert. The publisher of Le Neptune françois, Pieter Mortier, was licensed to reproduce the French atlas, but when he was unable to obtain the copperplates he simply commissioned an engraver to reproduce them. Nor did he waste any time in doing so: the French edition was published in 1693, and Mortier managed to release his version later that same year!

The atlas was hand-colored and distributed in at least three national markets (England, France, and Holland), which led to significant variation in its color scheme. The Chapin version of van Vianen’s print is no exception: the columns which bookend the image, for instance, are monochromatically blue, as opposed to the intricately colored pillars in other versions; many of the figures’ vestments, as well as the trumpets of Neptune’s myrmidons and the flags surrounding the picture, are blue in complement, giving this copy an even more marine and abyssal quality than its variants.