Wilder Bentley the Elder, born in 1900 and died in 1982, is perhaps best known as the proprietor of The Archetype Press, a semi-fabled California printing enterprise which published, among much else, Ansel Adams’ first book of photographs in 1938. Bentley’s artistic pursuits, however, were by no means limited to publishing, and he excelled as well at poetry (which he taught at San Francisco State College), graphic arts, and painting. 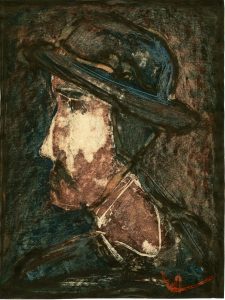 The Chapin Library holds five of Bentley’s works on paper: one portrait in oil paints and four pen and ink landscapes. The former, done in 1946, shows the profile of a man named Lindsay Denis. Brusque and earthy, the painting is a thick field of gradient dark splotches. A thick-lined trapezoid serves as a patch of hair; a muddled rash of white, set against his terrestrial red-brown jaw, signifies Denis’s cheek. The background, a whorl of muds and black ocean water, is pervasive, but where it comes to infiltrate Lindsay’s form — at the weak edge of his bowler hat, at his sloped suggestions of shoulders — it seems to be less a corruption than a welcomed incorporation. Bentley’s sitter is of these hues, comfortably, awash in them but hardly antagonized. The painter’s title for this piece was Lindsay Denis, Angler : Denis was a fisherman. 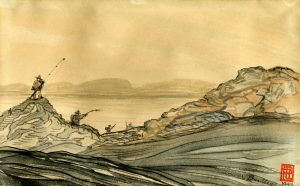 Perhaps this painting’s subject is featured also in one of Bentley’s two fishing scenes held in Chapin Library. The earlier, done in 1944, shows four figures casting their lines from the rocks of Monterey Bay; the later, from 1945, is a similar scene of five men fishing in Estero Bay. Bentley was a close friend and informal student of the expat Japanese artist Chiura Obata, whose influence is apparent in these oneiric paintings (as well as in Bentley’s two landscapes in the Chapin Graphics Collection). 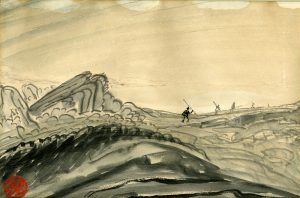 All four were done in sumi-e, or ink wash painting, which is a traditional east Asian technique that Bentley learned from Obata. One typical element of sumi-e paintings is a red seal accompanying the artist’s signature, which Bentley has included in each of these works. 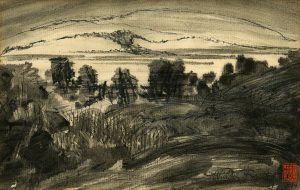 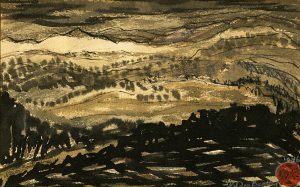