The Art of Calligraphy 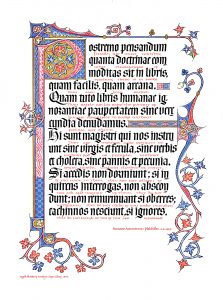 “The possession of any old book,” wrote the English bibliographer William Blades (1824–1890) in the final lines of his Enemies of Books, “is a sacred trust, which a conscientious owner or guardian would as soon think of ignoring as a parent would of neglecting his child.” Written in 1880, Blades’ Enemies is an impassioned (if perhaps, as you might have gleaned, slightly obsessive) account of any and all agents of libricide — from insects and elements to “ignorance and bigotry.” Its brief conclusion, though, is an encomium to all pleasures bound or paginated, a celebration for people to whom “every book is a personal friend!”

In a honed and unpretentious script called the Foundational Hand, Blades’ bibliophilic paean was transcribed in 1963 by Florence Brooks. Brooks was an English-born calligrapher who settled, in the mid-20th century, in Lenox, Massachusetts. A student of illustrator Elizabeth MacKinstry and a highly regarded member of the Guild of Book Workers (a national organization founded in 1906), Brooks was commissioned by H. Richard Archer, Chapin Librarian from 1955 to 1977, to design bookplates for the Chapin Library, as well as bookish transcriptions like this one. Here her lettering is fittingly uncomplicated, finely wrought, and nearly unadorned — save for an enlarged opening line and one punctuating blue initial at the page’s midriff — complementing Blades’ solemn, yet fervent, laudation. 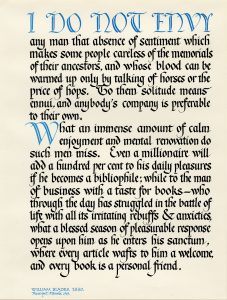 Chapin Library holds two bookish sheets by Brooks, the other containing a brilliantly illuminated passage from Richard Aungervyle’s Philobiblon, transcribed in 1974. Aungervyle, commonly known as Richard de Bury, wrote this early and extensive account of book-collecting techniques in Latin in 1345, and Brooks’s transcription of a passage which finds the author rejoicing in the unmatchable magnanimity of books contains both the original text (in Black Letter script) and an accompanying English translation (in red uncials between the Latin lines). The sheet’s main charm, however, lies in its faithfully medieval flourishes: a large illuminated “P” to begin “Postremo,” its spine marking the text’s left edge; a swirling floral border of blues and reds, judiciously gilded. As much as Aungervyle’s text, Brooks’s care in illuminating it conveys the edificatory delights open to anyone who opens a book.