Behold How Pleasant It Is 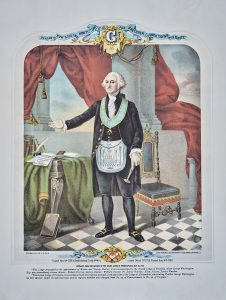 “Behold how pleasant it is,” reads the banner flowing above a stolid image of America’s first (and here rather gussied) president, “for brethren to dwell together in unity.” The quotation comes from Psalm 133, a biblical passage of especial significance for Freemasonry; the image it adorns was meant, in addition to celebrating the statesman, to illustrate the bearing of Masonic principles on the American political project. In this hand-colored lithograph, from the art collection in Chapin Library, George Washington, donning sash, apron, and gavel, gestures plainly above a studiously unkempt table, on which rests a scroll which reads, “The grand object of Masonry is to promote the happiness of the Human Race,” a quote attributed to him.

His outstretched arm and open palm seem to beckon the viewer into the pleasant fold of that brotherhood striven to (nominally, at least) by both America’s founders and Masons generally. Indeed, the ideals of this most storied secret order have been identified for their influence on the Enlightenment principles which birthed, in part, the American project. And while the Craft’s historical import is likely not so total as to precipitate “the destruction of the traditional social and political order based on an authoritarian philosophy and characterized by inequality and privilege,” as some Masonic historians have averred, the fatally flawed egalitarian and revolutionary impulse that shaped American democracy in its infant decades was one cultivated, at least in part, by Freemasonry. 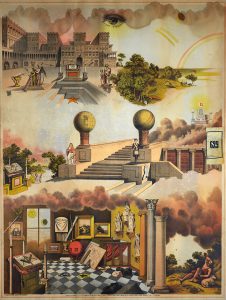 Another Masonic print in Chapin Library’s collection provides an internal and much more esoteric perspective on the fraternal order. Likely a “tracing board,” or instructional diagram used to educate new members, the lithograph by Boston’s J.H. Bufford’s Sons is teeming with the mystical symbolism for which the Masons are famous. At the top of the sheet, an all-seeing eye gazes over a three-tiered dreamscape of tools, coffins, and beehives (and much, much more). In its bottom right, Jacob snoozes with a sheep by his side, in pastoral ignorance of the ladder reaching towards heaven behind him.

Seeking submissions! The Williams Way: Reckoning with Our Silenced Narratives
The Art of Calligraphy
Libraries MENU