Souvenirs of the Flower City 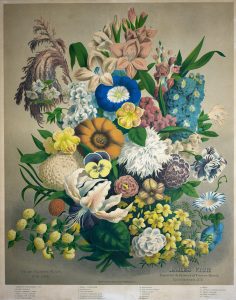 Before expansion tugged America’s centers of industry westward, especially in the decades surrounding the Civil War, the city of Rochester, New York held a distinctive role as the country’s grain milling hub — so much so that it came to call itself the Flour City. When, eventually, it was forced to cede this title to towns further west, a happy, homonymic coincidence meant that residents wouldn’t have to search too hard for a new moniker: Rochester, in the 19th century’s closing decades, became home to perhaps America’s most robust and industrious crop of professional seeds- and nurserymen. Far from both the eastern cities and the receding frontier, Rochester was uniquely positioned to take on its role as an important business center for Victorian America’s obsession with gardens and gardening. So, it simply renamed itself the Flower City!

Chief among Rochester’s captains of postbellum horticultural industry was a man named James Vick, an English-born plantsman trained in printing and publishing (who, incidentally, was involved in the founding of Frederick Douglass’s famed abolitionist newspaper, The North Star). Through his own publication, The Horticulturist, which he helmed beginning in 1853, Vick began selling seeds to interested readers. By the end of the decade, this venture had become profitable enough for Vick to make it his main focus. By 1877 (five years before his death), Vick controlled dozens of acres of seed gardens across the city, as well as a four-storey warehouse where more than 100 employees worked — most of this space, however, was dedicated not to plants but to printing. “In addition to the ordinary conveniences of a well regulated seedhouse,” wrote a journalist covering Vick’s expansive operation, “there is connected with this establishment a printing office, bindery, box-making establishment, and artists’ and engravers’ rooms — everything but the paper being made in the establishment” (Tice, 36–38). 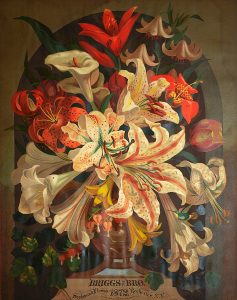 The most notable product of Vick’s publishing house — beloved still today for its sheer floricultural ebullience — was his Floral Guide and Catalog, a brilliantly illustrated almanac advertising his wares. It was first issued in 1862, and by the 1870s more than 150,000 catalogs were sent out annually. Eventually, Vick (and, inspired, his competitors) expanded into monthly magazines, colored prints, and large floral advertising posters. Chapin Library holds three such posters, one from Vick and two from the contemporaneous Briggs & Brother. Each is a crowded, colorful, joyously botanical celebrant at this early dawn of America’s consumer culture — three fertile memories of the unique fruits this moment in agricultural history bore.

Pack your duds for a trip up Salt River
Library Services: End of fall through start of spring semester
Libraries MENU