Pack your duds for a trip up Salt River 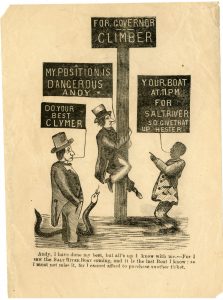 In 1832, so the story went, Henry Clay’s presidential campaign took a literal turn for the worse. Running late for a speaking engagement in Louisville as the election loomed, Clay hired a local Kentuckian to take him up the Ohio River. Promising a shortcut, the boatman (a surreptitious Democrat, as Clay would soon discover) took a turn up the notoriously treacherous Salt River, whose twists and innumerable sandbanks make it famously difficult to navigate. Unsurprisingly, Clay missed his event. When, come November, he lost the election to incumbent President Andrew Jackson, his Salt River debacle became a source of much ribbing — so much so that, for the remainder of the century, a failed political candidate could be said, presumably with a hearty laugh and not an insignificant amount of scorn, to have been “rowed up Salt River.”

Unfortunately, etymologies so wholesome and direct seldom prove to be anything but specious; indeed, Clay’s inauspicious detour off the Ohio has been shown to be as apocryphal as it seems, and it is but one of several stories proposed as the source of the once-popular political idiom associated with this stream in Kentucky (Sperber, 1951).

By the middle of the 19th century, electoral losers were often mocked with Salt River slogans printed on small cards and hawked for several pennies after elections. Often, these came in the form of “Salt River Tickets,” or small novelty prints made to look like steamboat tickets granting their holder’s passage up the miserable creek. “Now Listen,” reads on exemplary note, “You Ill-Advised, Mis-Guided Republican Victim of Irresponsible Politicians, PACK YOUR DUDS FOR YOU ARE GOING ON A LONG TRIP.” 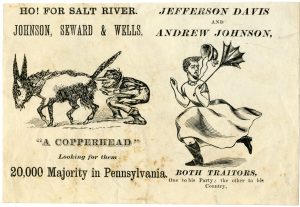 These tickets were typically purchased by members of the winning party following their candidate’s success and passed out (mercilessly, one presumes) to sulking acquaintances across the aisle. Some tickets even contained blank spaces for a gloating partisan to write in the name of a poor friend whose candidate had lost. In contrast to similar political ephemera of 19th-century America, Salt River Tickets were celebratory rather than proselytistic, aiming not to convince voters of a candidate’s merits but simply to chide the electorally unsuccessful. And in a contrast perhaps even starker, these mean-spirited artifacts differed from much of our contemporary sectarian political imagery in that, rather than further divide the electorate, they “presumed a personalized exchange between specific individuals. In their passage from hand to hand, the tickets sustained a perverse kind of sociability across partisan lines” (Horner and Brewin, 2007). (The bounds of this sociability were, of course, restricted by the virulently racist language and imagery which many tickets, especially those teasing Republicans, employed.)

The Salt River idiom, however, was not limited to faux steamboat passes; especially in the years following the Civil War (and before the waterway’s eventual extinction in the 20th-century popular discourse) Salt River pervaded political cartoons, as well. Two such pictures — one from 1868’s presidential election, another from Pennsylvania’s 1866 gubernatorial race — are held by Chapin Library. In the former, a long-nosed lascivious “copperhead” (or pro-Confederate, anti-war, Northern Democrat) sticks his nose in the rear end of his party’s emblematic donkey, presumably looking for the 20,000 votes that Horatio Seymour would have needed to best Ulysses S. Grant in the state of Pennsylvania. Curiously, the small print’s heading reads, “Ho! For Salt River. Johnson, Seward & Wells [sic].” Andrew Johnson, however, did not seek reelection in 1868; the disdain which Republicans (as well as many others) held for him nationally following his slim avoidance of removal from office earlier that year, however, could explain this picture’s confusion. (Just look to the adjacent image on the same sheet for proof of Johnson’s poor reputation — caricatured in petticoats, a feminized Johnson is labeled a villain as traitorous as Jefferson Davis!)

In the latter cartoon, Hiester Clymer, the white supremacist Democratic candidate who lost his bid for the Keystone State’s governorship to Republican John W. Geary in 1866, is shown shuffling up a wooden pole labeled (lazily, from a comedic perspective), “For Governor Climber.” A jubilant black man, pointing and laughing, reminds the candidate caustically that his boat for Salt River is fast approaching, while a sullen companion of his looks on with hands in pocket and, frowning, halfheartedly says, “Do Your Best Clymer.” Between his legs, a snake (possibly referencing Benjamin Franklin’s famous Join, Or Die woodcut) hisses at Clymer climbing. “Andy,” says the candidate, “I have done my best, but all’s up I know with me. — For I saw the Salt River Boat coming, and it is the last Boat I know: so I must not miss it, for I cannot afford to purchase another ticket.”