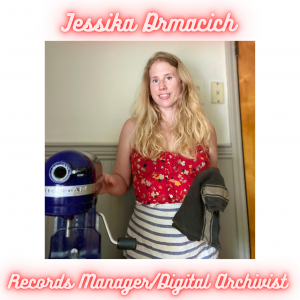 Jessika is the Records Manager and Digital Resources Archivist at Williams Libraries. With her daughter, Oona, they enjoy baking cookies and watching Netflix’s “Nailed It,” which is the inspiration for her participation in this project. Here’s Jessika’s report:

When I was young, I spent my summers both on an island in Puget Sound with my grandfather and in Indian Falls, New York with my grandmother. Every summer we celebrated Grandma Lee’s birthday with a lemon tart or lemon meringue. Ever since, lemon desserts have been entangled in my July memories. Even today, my favorite dessert is lemon panna cotta. So, for this project, I chose the white lemon cream recipe from The Improved Housewife, 1853.

As I gathered my ingredients (which are simple: cream, eggs, lemons, and sugar), I created a music playlist (see below)! My five-year-old daughter and I love making playlists for traveling, exercising, a 5 minute drive to a friend’s house, and of course cooking/baking. This playlist includes some summer favorites and a couple songs for Grandma Lee.

Note: For this project, I decided to bypass 1850s technology and employ the KitchenAid.

Discoveries and questions during the process:

How long do I boil the lemon in the cream? Does the recipe really mean *boil*? I decided to simmer for 30 minutes as to avoid curdling.

What does “well-beaten” yolks and whites mean? For the whites, I interpreted well-beaten as peaking the whites. The yolks I beat in the mixer.

When peeling the lemon, it’s important to remove all the lemon piths or else the taste will be bitter!

Make certain the cream is at a slight simmer before adding lemon peel.

Do I wait until the cream cools down before I mix it with the whites and yolks? What does “mix until cool” mean? I concluded the recipe conflates room temperature with cool.

After mixing, taking advantage of more modern technology, I chose to move the lemon cream to the refrigerator.

As I was making a recipe from the mid 19th century, I became curious of what kind of sugars were available. Reading some micro-histories (a reading list below) on sugar, including an illuminating article from New York Time’s 1619 project, they reveal how inextricably linked sugar in the 19th century was to the horrors of the slave trade. After the Haitian revolution in 1804, most sugar production for the United States moved to Louisiana plantations. With this geographical shift, sugar production and with it the trafficking of enslaved human beings to Louisiana sugar plantations skyrocketed. In a drastic move from sugar consumption in the 18th century, pre-Haitian revolution, the average American in the 1830s ate about 12 pounds of sugar a year (today it is several times this amount). For those who opposed slavery, sugar was a symbol of the evils of the slave trade and extremely unethical commerce. Abolitionists boycotted cane sugar.

Recently, I picked lavender at a local farm. So, when plating the cream, I added some of the Provençal variety on top. 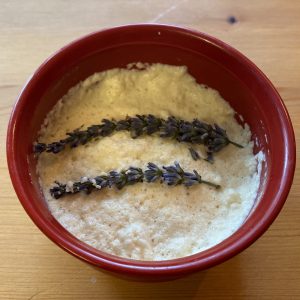 My assessment: The final lemon cream was decent, but not at all comparable to a delicious lemon panna cotta. And, I’m not quite sure this result was due to my interpretation of the very vague recipe or perhaps this was the type of cream those in 1853 clamored for. In the case of the latter, I lament 1850s palates.

Boil the thin peel of two lemons in a pint of cream, strain and thicken it with the well beaten yolks of three, and the whites of four, eggs; sweeten with powdered loaf sugar, stir till nearly cold, and put it in glasses.

The improved housewife, or, Book of receipts, by Mrs. A. L. Webster (Boston, 1853) is part of Chapin Library’s historic cookbook collection.

The fall 2020 semester is underway, with strict health and safety protocols in place. All Williams College buildings are closed to the public and visitors until further notice.