A fourth sort, call'd "A Quire of Paper" 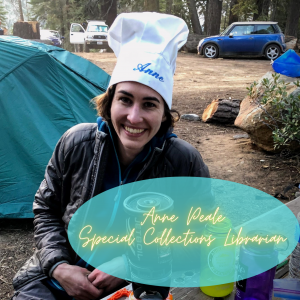 Anne is the Special Collections Librarian at Williams, where she works with faculty, students, rare books, and manuscripts to support teaching and learning. On weekends, she often cooks outside on a camping stove while on rock climbing and hiking trips. The chef’s hat arrived with her first cookbook, a collection of recipes for cat treats, as a present for her 9th birthday. Here’s her report:

What drew me to this recipe was the title. How are these pancakes like paper, and what exactly is a quire? In Special Collections, we use the term to refer to a gathering of paper sheets destined to be sewn together as part of a book. “Quire” was also historically used to refer to a set quantity of paper, usually a stack of 25 sheets, and I suspect that it’s this usage that Hannah Glasse is referencing in her recipe. The comparative link between paper and pancake seems to be that they are both quite thin and have delicate edges — “deckle edges” in book terminology. In Glasse’s pancakes, the deckle edges are formed by the thin, quick cooking sections where the pan slopes upward, which are both delicious and inclined to break off easily. In papermaking, deckle edges are the feathery areas along the sides of a sheet where the fibers are the thinnest. If you’re interested in seeing how deckle edges are created, take a look at the “Hand Papermaking in Fabriano” video on our new LibGuide.

We made crepes nearly every week when I was growing up, but my family’s recipe is much simpler than this one — just eggs, milk, and flour. I was intrigued to see how the texture and taste would be affected by the low proportion of flour to other ingredients, and by the addition of spice, citrus, and a ton of dairy fat (half a pound of butter plus a pint of cream!). 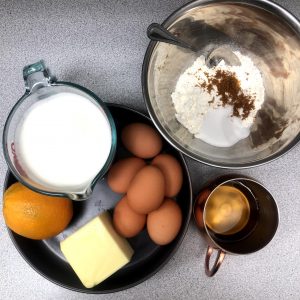 Sourcing the ingredients required a bit of creativity. The recipe calls for three spoonfuls of Sack, which a bit of internet research suggested corresponds approximately with modern Sherry wine. A trip to the local liquor store took care of this gap in our pantry, but we couldn’t get hold of orange flower water in time, so substituted the grated zest of half an orange.

As I predicted, Hannah Glasse’s “three Spoonfuls of fine Flour” proved to be difficult to interpret, with the result that the batter was unworkably thin and my first several pancakes tore when it came time to flip them. I compromised and added another generous spoonful of flour (about a scant quarter cup). After that, things went much more smoothly! We experimented with using both a stainless steel and a cast iron pan, as Hannah Glasse wouldn’t have had access to teflon. The stainless steel pan’s smoother surface meant that we could make thinner pancakes and still flip them without damage, but it was a pretty close tie. Fortunately, the amount of fat in the batter meant that we had zero issues with sticking. 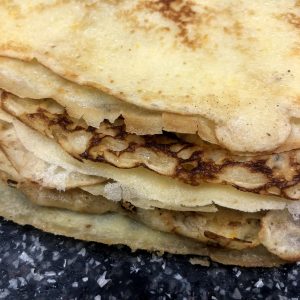 Unlike the crepes I’ve made in the past, these were delicious without any toppings. I splurged anyway, and made a simple berry reduction sauce which was a nice complement to the citrusy, buttery pancakes. The nutmeg and Sack/Sherry added depth to the flavor, but the amount of butterfat was somewhat overwhelming and made the pancakes quite heavy despite their thinness. Although we didn’t quite get a complete quire of 25 pancakes out of the batter, I was full before I had gotten through my half of the stack. While we probably won’t make this recipe again exactly as written, we’ll definitely experiment with adding some of these 18th-century ingredients and flavors next time we make crepes!

Recipe for “Quire of Paper” pancakes

Take  Pint of Cream, six Eggs, three Spoonfuls of fine Flour, three of Sack, one of Orange-flour Water, a little Sugar, and half a Nutmeg grated, half a Pound of melted Butter, almost cold; mingle all well together, and butter the Pan for the first Pancake; let them run as thin as possible; when just coloured they are enough: and so do with all the fine Pancakes.

The art of cookery, made plain and easy, by Hannah Glasse (London, 1747) is part of the Chapin Library’s historic cookbook collection.