Indian fricassee of Chickens with curry 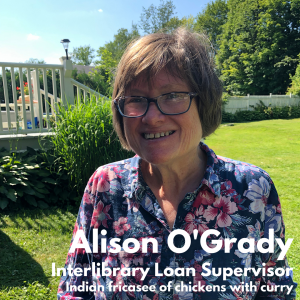 Interlibrary Loan Supervisor Alison O’Grady had a little helper to cook this chicken fricassee from the 1818 Universal Receipt Book. Here’s her report:

Food has always been an important part of my family life. Creating dishes together with my children and husband was integral to our life together. When my children were small part of the fun of cooking was to count the number of vegetables were in a dish, and we still tally them to this day. My interest in cooking has waned a bit as my children are now grown, but our granddaughter Vivian has sparked a new interest in preparing food together to encourage her and us to eat healthy, and be aware of where the food we eat comes from.

Curry has been the spice I’ve experimented with a lot lately, and the author’s surname of “Homespun” intrigued me since I’ve become a bit of a “home body” while working from home these last few months. It felt like this cookbook was calling my name. The recipe was thankfully very simple, and my goal was to be as authentic as possible in preparing this dish, and I pretty much followed the directions as cited.

Priscilla’s recipe called for two whole chickens. I was tempted to use chicken that was pre-cut, but gave in and purchased one whole and rather large chicken to use in the recipe, fully aware that people in 1818 mostly had to do their own butchering. I confess to never having cut up an entire chicken before, but I did this time with an extremely sharp knife that scared me silly. 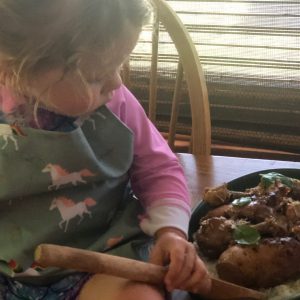 No fingers lost, I managed to cut it into 2 breasts, 2 legs and 2 wings, and various random pieces with little trouble. The chicken was boiled in salted water, then browned in a lot of butter with garlic and a slicedonion. Curry and lemon were later added. The chicken was served on rice with some broth and tasted very much like a curry dish from any modern Indian restaurant.

To my surprise, I found this chicken to be very tender and tasty, as did my daughter and son-in-law. Vivian, age 2 did not seem to share our enthusiasm for it though. Trying times such as these spark a reminder of the importance of food and spending time as a family. To make this a family event I drafted Vivian, to help prepare the dish. A new O’Grady cooking tradition has begun!

Recipe for Indian fricassee of Chickens with curry 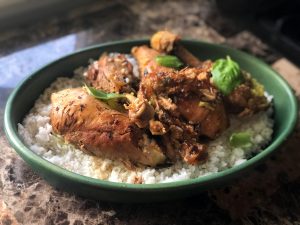 Cut two chickens in the usual manner for a fricassee, and having washed them clean, put them into a stew pan with as much water as will cover them and a table spoonful of salt. Keep them covered as much as possible, consistently with their being well skimmed; and when they are enough boiled take them up and pour the liquid into a pan. Then brown a little half a pound of fresh butter, to which add two cloves of garlic and an onion sliced. Let these fry together until they are brown, often shaking the pan and then putting in the chickens, sprinkle over them two or three table spoonsfull of curry powder. Cover the pan close and let the chickens remain until they are also brown; then add the liquor in which they were boiled, with or without the juice of a Seville orange or lemon, and let all stew until tender. Rice should be served up with the curry in a separate dish. Wash half a pound of rice clean in salt; then putting it into two quarts of boiling water, let it boil quick for twenty minutes, strain it through a colander, and serve it up in a dish.