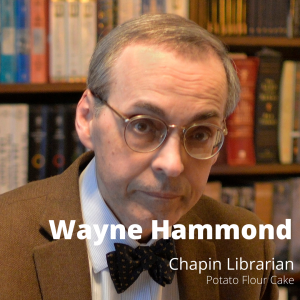 Wayne Hammond is the Chapin Librarian, and has been a rare books librarian at Williams since 1976. He is also a leading authority on J.R.R. Tolkien.

The Settlement Cook Book was first published in 1901 by Elizabeth Black Kander for people served by the Settlement House in Milwaukee, many of them poor, mainly Jewish immigrants from Russia and Eastern Europe. Ever improved editions appeared well into the 20th century (I have one from 1944).

Kander’s (gluten-free) potato flour cake is dense and sweet, with a touch of lemon flavor, good for dessert or breakfast in small slices. The batter is stiff, so that the beaten egg whites can’t really be folded in “very carefully”. I interpreted a “moderate oven” as 350 degrees, and baked in a greased 9-inch springform pan; 40 minutes was enough. I used large eggs, though 1901 eggs might have been smaller (not U.S. graded until 1943). 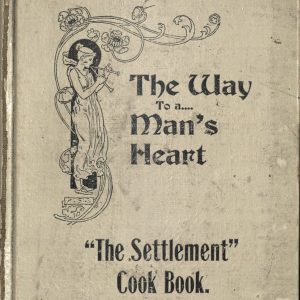 Separate the whites and yolks of eggs. Beat the whites of seven eggs very stiff. To the well beaten yolks of nine eggs and the whites of two, add the sugar and lemon juice. Beat thoroughly, add the potato flour, and beat again. Now fold in the beaten whites very carefully and bake slowly in a moderate oven. Bake forty to fifty minutes.

The way to a man’s heart (“The Settlement” Cook Book, 1901) is part of the Chapin Library’s historic cookbook collection.