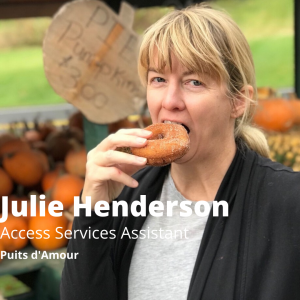 I chose this recipe because I knew I wanted to do a dessert, but not necessarily a pudding or cake. The name interested me because it translated to “Wells of Love,” made out of puff pastry. Also, it involved adding “Sweetmeats” to embellish the pastry, which sounded fun.

Reading the recipe, I noticed it said to make “pyramidical forms” with layers of puff pastry. Will doing this actually create a well-shaped item? It seemed unlikely. It also said to cook in a “moderate oven” until done but “pale.” I look at my frozen puff pastry box for more specific instructions. I checked on it a few minutes later. It was looking very amorphous, extremely tall, and somewhat pyramidical but definitely not like a well. I zoned out for a moment to consider other implications and possible interpretation of “Puits d’Amour.”

Onto the Sweetmeats, which I was to place along the edges of the Puits d’Amour. First I had to make a simple syrup mixture “To clarify Sugar for Sweetmeats.” It said to add a “well-whipt white of an egg” – what? My dog loves egg yolks so she encouraged me to do this immediately despite my hesitation to put egg white in simple syrup. I whipped it well (I had no idea what the goal was here so I decided on frothy) and poured it into the sugar and water. Sure enough, as stated, it did “leave a black scum on the top,” although more of a gray color than black and obviously made of egg. Ew. Was the egg white added as a thickener? Or was it to create and/or draw out the impurities?

Anyway, I had already chopped up some different types of fruit: mandarin peel, lime chunks and peels, peach pieces, blueberries, and cantaloupe. I thought the cantaloupe might be kind of weird candied, but hey, this is the year to try that out!

Next, the first sentence of “To candy any sort of Fruits:” “When finished in the syrup, put a layer into a new sieve…” – a layer? I thought that might be a layer of syrup because at that point the book was coming out of an extensive description of making the syrup. But, a layer of syrup poured into a sieve goes right through, it being a liquid and all. Hmmm. I paused to consider that the fruit should probably be cooked a bit. In the syrup! Maybe it’s a layer of fruit cooked in the syrup? Into the syrup the fruit goes. The blueberries immediately dye everything lilac, and I realize I should have staggered the fruit cooking times. 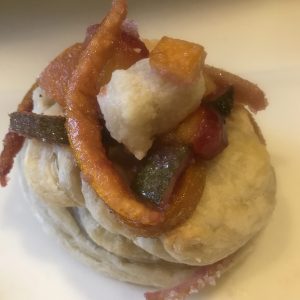 Time for a taste! Well puff pastry is of course always good, and the fruits were all pretty nice. The best were the mandarin peels and the worst were the cantaloupe, which were too earthy-tasting to use here. The combined flavor of the pastry and candied fruit was for me a little sparse. I think next time I would add a little jam or a creamy element. Overall, this was very fun and a great experiment! Also, the leftover simple syrup turned out to have a WONDERFUL fruity taste that is fantastic in some seltzer water, like an Italian soda. 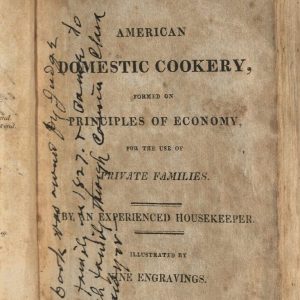 Cut a fine rich puff-paste rolled thin, with tin shapes made on purpose, one size less than another, in a pyramidical form, and lay them so: then bake in a moderate oven, that the paste may be done sufficiently, but very pale. Lay different-colored sweetmeats on the edges.

Maria Eliza Ketelby Rundell’s American Domestic Cookery: Formed on principles of economy, for the use of private families (Baltimore: 1819), is part of the Chapin Library’s historic cookbook collection.