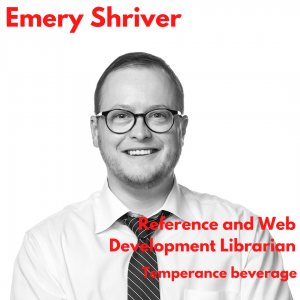 Emery Shriver is the Reference and Web Development Librarian at Williams, where his work resides at the intersection between critical librarianship and user-centered services. In his spare time he enjoys catching Pokémon, crafting, and working to dismantle systems of oppression. Here’s his report on crafting a holiday beverage from Mrs T. J. Crowen’s The American lady’s system of cookery (1852).

I didn’t choose this recipe, but I was happy to make it, both because I love summery citrus beverages, and because it seemed very simple to make.  I would not describe myself as someone who enjoys cooking, but I do enjoy eating and drinking, and cooking is a means to that end.  I opted for the simplest version of this recipe, using pre-cut pineapple and raspberries, for less prep.  I did, however, use actual lemons, which I juiced by hand.

As I was juicing, I considered the following questions: 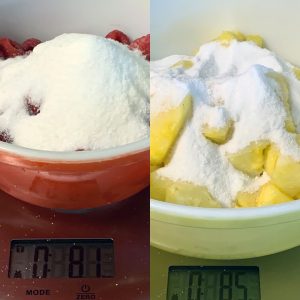 After juicing, I added sugar to the lemon juice, the raspberries, and the pineapple. This recipe called for 2 pounds of sugar, which sounds like A LOT, and it is. It made everything very sticky.  The next step was to crush/bruise the berries and pineapple, which I did with a potato masher, and then I combined it all together with 3 quarts of ice water and stuck it in the fridge while I cleaned up the sticky mess.

About an hour later, grateful for the refrigerator and the dishwasher, I was ready to taste this Fine Temperance Beverage.  It was pretty chunky…lots of lemon pulp, chunks of pineapple, and raspberry seeds.  It was also SO SWEET.  I’ve heard that temperance beverages were made very sweet to tempt folks away from alcohol, but this did not make me want to stop drinking.  Not being a teetotaler myself, I decided to add some “demon alcohol” as suggested in the recipe below the temperance beverage, and do a taste test. 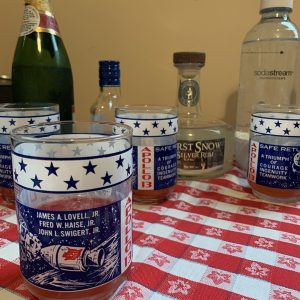 After pouring the drink through a strainer to remove some chunks, I split it into four parts.  I added champagne to the first, brandy and locally-distilled rum to the second, kept the third as the control, and added a liter of club soda to the fourth.  My favorite was the one with club soda.  Very refreshing and bubbly.  I don’t like to waste alcohol though, so I combined everything back together, and added the rest of the bottle of champagne and another liter of club soda to it.  Then I bottled it up to share with friends (no contact delivery, of course).

Here’s what they said:

“It was EXACTLY what I needed.”

“Do you have the recipe?  My family loved it.”

I, too, enjoyed many glasses over the holiday weekend, while listening to John Philip Sousa, watching Hamilton, and looking forward to the revival of 1776.

Recipe for A fine temperance beverage

To the juice of a dozen fine fresh lemons, pressed so as to extract the essence from the skins, put one pound of double refined sugar; to one quart of picked raspberries or strawberries (or a pint of preserved fruit), put half a pound of fine sugar — pare a ripe pine-apple and cut it in thin slices, and each slice in four or six pieces, and put with it half a pound of sugar; stir the lemon juice with the sugar until it is all dissolved, crush the strawberries, and lightly bruise the pine-apple; put the lemon in a large bowl and add to it three quarts of ice water, then add to it the strawberry and pine-apple, stir it until the sugar is all dissolved, then set the bowl on ice for an hour before serving.

The American lady’s system of cookery is part of the Chapin Library’s historic cookbook collection.