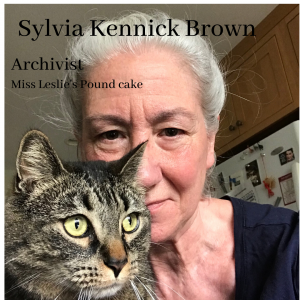 I’ve always been more of a baker than an overall cook, so my selection of this recipe should come as no surprise. Rosie, also called the ‘Ghost Cat’ because you don’t always see her, prefers homemade cat treats. Any Williams student who needs an excuse to hang out with animals: give me a call.

We love cooking, but don’t always spend the time to do it, or do it thoughtfully. So, thank you, Special Collections, for offering this opportunity to explore the recipes in the College’s collections.

I inherited a pound cake recipe from my grandmother, originally titled “Mrs. Harris’s sand cake”. I have no idea who Mrs. Harris was, but the sand cake (a.k.a. pound cake) has been a favorite in our family over the years. I was really curious how a recipe from about 80 years previous might compare.

Preparation of the cake also coincided with our puppy’s first birthday. Because the 1830s recipe includes nutmeg, however, Mishka couldn’t nibble at the leftovers. Yes, nutmeg is poisonous for dogs. 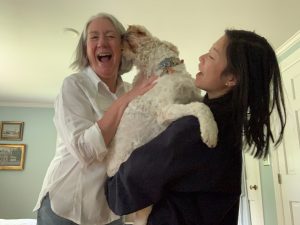 I had selected this recipe but then realized I had no idea where/how to purchase/make rose water. Elsewhere in the cookbook there were instructions for making rose water, but it entailed several weeks of soaking, draining, etc., time I didn’t have. I decided to use a distillation method which seemed to work pretty well. Though, really, I don’t get what’s so important about rose water. Or maybe it’s just my rose water. It was also a leap of faith to determine how much wine, brandy, and rose water would make up a ‘tumbler’ amount. I retrie 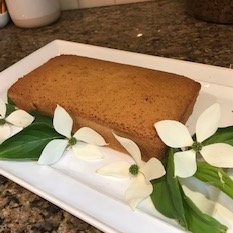 ved my most 19th-century-looking glass–okay, I’m just saying that to make it seem as though I was trying really hard to reproduce results accurately–and made a guess. All in all, the recipe worked pretty well. The cake is a little dense. It uses much more alcohol and spice than my family’s recipe. The alcohol burns off, of course, but the spices make the pound cake taste much more like a spice cake. Reports from my daughter and her boyfriend: “Gosh, that’s actually okay.” “Not bad.”

Prepare a table-spoonful of powdered cinnamon, a tea-spoonful of powdered mace, and two nutmegs grated or powdered. Mix together in a tumbler a glass of white wine, a glass of brandy, and a glass of rose water. Sift a pound of the finest flour into a broad pan and powder a pound of loaf-sugar. Put the sugar into a deep pan and cut it up with a pound of fresh butter. Warm them by the fire til soft; then stir them to a cream. When they are perfectly light, add gradually to them the spice and liquor, a little at a time. Beat ten eggs as light as possible, and stir them by degrees into the mixture, alternately with the flour. Then add twelve drops of oil of lemon; or more if it is not strong. Stir the whole very hard; put it into a deep tin pan with straight or upright sides, and bake it in a moderate oven from two to three hours. If baked in a Dutch oven, take off the lid when you have ascertained that the cake is quite done, and let it remain in the oven to cool gradually. If any part is burnt, scrape it off as soon as cold.

Directions for cookery, in its various branches, by Miss Leslie (Philadelphia: 1837), is part of the Chapin Library’s historic cookbook collection.