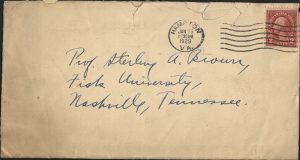 Williams Libraries has received collections of books, manuscripts, and record albums documenting the life and work of one of America’s most influential poets and scholars Sterling Allen Brown, a class of 1922 graduate of Williams College.

Sterling Allen Brown (1901-1989) was an influential African American teacher, literary critic, and poet whose poetry was rooted in folklore sources and Black vernacular. The son of a Howard University professor and a graduate of Dunbar High School in Washington, D.C., he received an academic scholarship to Williams College, where he studied traditional literature, but also explored blues and jazz music. Brown graduated Phi Beta Kappa from Williams, and received his master’s degree from Harvard University in 1923. Brown began his teaching career at several historically Black institutions at a time when Williams excluded African Americans from the faculty. In 1974, Williams presented him with an honorary degree of Doctor of Letters.

Materials from the Sterling Brown collections will be available to researchers by appointment through Williams Special Collections in Sawyer Library. The Archives will hire an archivist for a two-year term appointment and interns to help process the materials, beginning in summer 2020, and will offer research fellowships to support original research using the materials beginning in the 2020-2021 academic year.