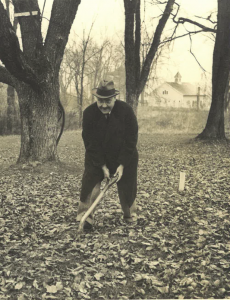 As one of the two presidential records interns for summer 2019, Jean Kim arranged and described the papers of Williams president James P. Baxter III. Following Tyler Dennett’s three-year presidency, Baxter became the tenth president of the college in 1937 and served for twenty-four years until 1961. The various correspondence, reports, and clippings in the collection show the wide range of Baxter’s professional commitments, including his active membership in numerous committees, his strong support of academic freedom, and his research and involvements during wartime. He was also interested in bringing international students to Williams through exchange programs and the graduate training program in development economics for students from Asia, Africa and Latin America. By looking at Baxter’s papers, one can learn about certain events that occurred at Williams during the time, such as the incident in which three Williams fraternity students incited great anger and disappointment from the community by going to court for killing a cat. Photographs and letters written to family members and close friends also reveal bits of Baxter’s personal life.

Due to the large size of the collection, it is yet to be fully processed, but certain sections of the collection are available for research. Contact Special Collections if you are interested in learning about president Baxter.

Jean Kim is entering her second year at the Simmons MLIS program, concentrating in Archives Management.