The Right to Vote: American Women's Suffrage in Retrospect 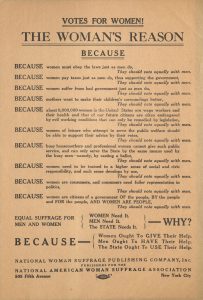 A century after the nineteenth amendment was passed by Congress, voting rights and suppression remain urgent matters for the American polity. A selection of materials from Williams Special Collections speaks to the idealism of an inclusive franchise, as well as the factionalism that permeated the suffragist movement of the 19th and early 20th centuries. Material displayed includes the works of Frederick Douglass (the only African American to attend the Seneca Falls Convention, which was foundational in American women’s civil rights), broadsides arguing in favor of the vote for women, and an illustrated cover to Woman Citizen celebrating “equal rights for all,” a claim that remains aspirational today. The Right to Vote: American Women’s Suffrage in Retrospect is on display in the Instruction Gallery (4th floor of Sawyer Library) during regular Special Collections hours through the summer.