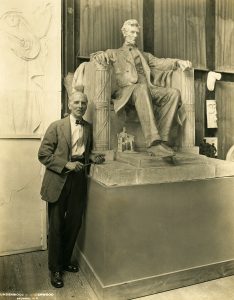 Harold Holzer, one of the leading historians of Abraham Lincoln and the political culture of the Civil War era, will speak at Williams College on Monday, April 29 about the life and work of American artist Daniel Chester French. Holzer recently published the biography Monument Man: The Life and Art of Daniel Chester French with Princeton Architectural Press.

French, one of the pre-eminent sculptors of his age, produced some of the most iconic public art in the United States, from the Minute Man statue unveiled in Concord, Massachusetts in 1875 to the seated Lincoln of the Lincoln Memorial in Washington, D.C., dedicated in 1922. French’s summer estate and studio, Chesterwood, in Stockbridge, Massachusetts, a property of the National Trust for Historic Preservation, is open to the public from May through October.

Mr. Holzer’s talk will be held in Room 452 of Sawyer Library at 4:00 p.m., near the south elevator. Admission is free, but seating will be limited. The event, sponsored by the Special Collections department of the Williams Libraries, will be followed by a reception in the nearby Chapin Gallery. It has been arranged in conjunction with the exhibition “Abraham Lincoln: American Icon”, drawn from Williams’ Chapin Library of rare books which administers the archives of Daniel Chester French and his family.

Copies of Mr. Holzer’s book will be available for purchase and signing at the reception.

For more information, contact Special Collections at 413-597-4200 or at [email protected]